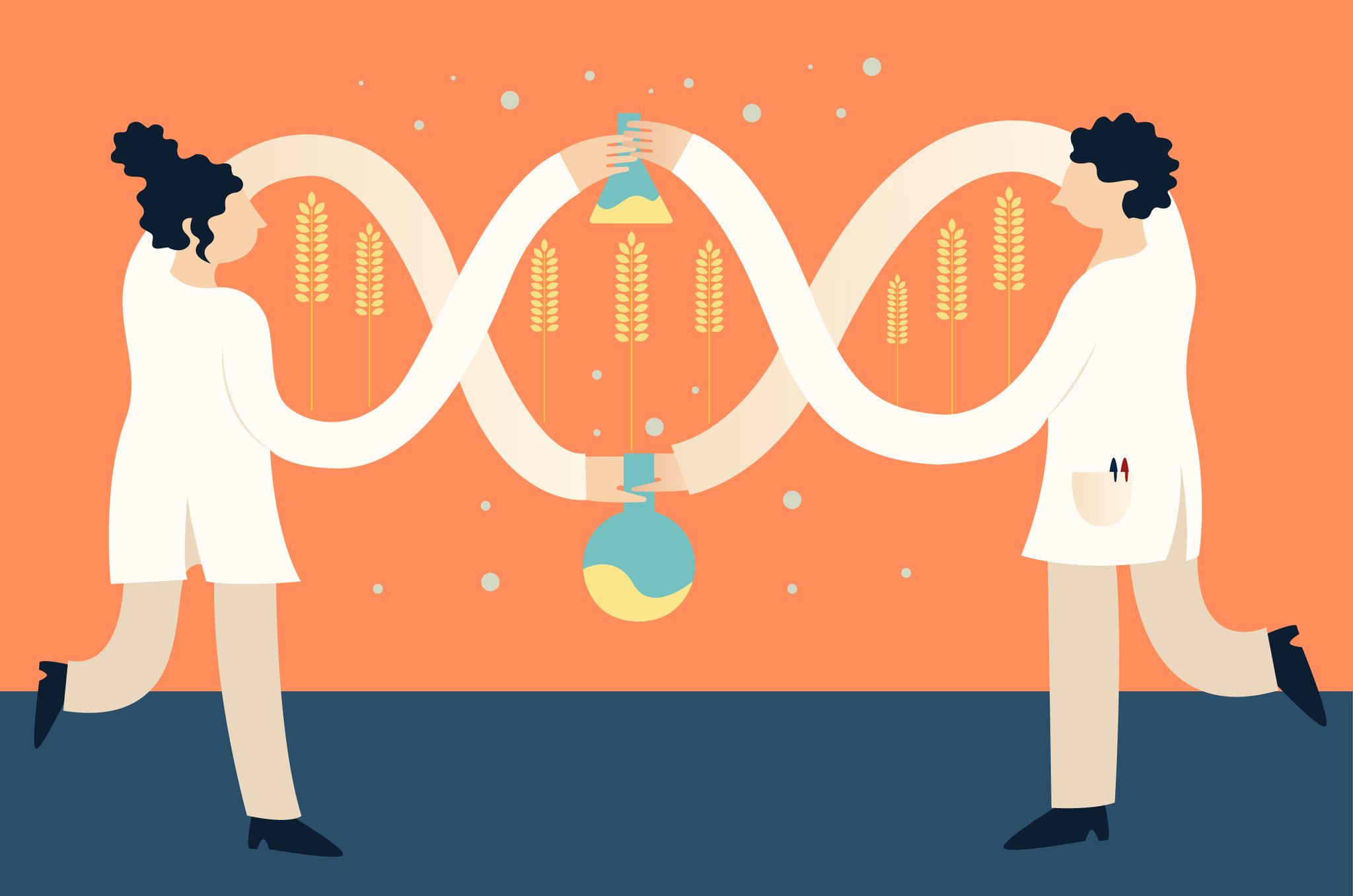 It’s human nature, it seems, to resist change and fear the unknown. So it is no surprise that genetic engineering of food and feed crops resulted in their resounding condemnation as “Frankenfoods” by many consumers, who seem as terrified of eating an apple with an added anti-browning gene or a pink pineapple genetically enriched with the antioxidant lycopene as I am of self-driving cars.

Trek down the grocery aisles of any large market and you’ll find many products prominently labeled “No G.M.O.s.” It’s much harder to spot the small print on many other foods stating “Partially produced with genetic engineering,” a result of a 2016 federal law that mandated uniform labeling of all food products containing genetically engineered ingredients.

The labeling requirement arose in response to public pressure and a confusing array of state rules. But while I endorse the public’s right to know and honest labeling of all products, in an important way it is very misleading. Farmers and agricultural scientists have been genetically engineering the foods we eat for centuries through breeding programs that result in large and largely uncontrolled exchanges of genetic material. What many consumers may not realize: For many decades, in addition to traditional crossbreeding, agricultural scientists have used radiation and chemicals to induce gene mutations in edible crops in attempts to achieve desired characteristics.

Modern genetic engineering differs in two ways: Only one or a few new genes with a known function are introduced into a crop, and sometimes the new genes come from an unrelated species. Thus, a gene meant to instill frost tolerance into, say, spinach, might come from a fish that lives in icy waters.

In the decades since the first genetically modified foods reached the market, no adverse health effects among consumers have been found. This is not to say there are none, but as hard as opponents of the technology have looked, none have yet been definitely identified.

Although about 90 percent of scientists believe G.M.O.s are safe — a view endorsed by the American Medical Association, the National Academy of Sciences, the American Association for the Advancement of Science and the World Health Organization — only slightly more than a third of consumers share this belief.

It is not possible to prove a food is safe, only to say that no hazard has been shown to exist. The fears of G.M.O.s are still theoretical, like the possibility that insertion of one or a few genes could have a negative impact on other desirable genes naturally present in the crop.

Among commonly expressed concerns — again, none of which have been clearly demonstrated — are unwanted changes in nutritional content, the creation of allergens and toxic effects on bodily organs. According to an interview in Scientific American with Robert Goldberg, a plant molecular biologist at the University of California, Los Angeles, such fears have not yet been quelled despite “hundreds of millions of genetic experiments involving every type of organism on earth and people eating billions of meals without a problem.”

Establishing long-term safety would require prohibitively expensive decades of study of hundreds of thousands of G.M.O. consumers and their non-G.M.O. counterparts.

Meanwhile, a number of impressive benefits have been well established. For example, an analysis of 76 studies published in February in Scientific Reports by researchers in Pisa, Italy, found that genetically engineered corn has a significantly higher yield than non-genetically modified varieties and contains lower amounts of toxins commonly produced by fungi.

Both effects most likely stem from the genetically engineered resistance to a major insect pest, the western corn rootworm, which damages ears of corn and allows fungi to flourish. The researchers said that the change has had little or no effect on other insects.

By engineering resistance to insect damage, farmers have been able to use fewer pesticides while increasing yields, which enhances safety for farmers and the environment while lowering the cost of food and increasing its availability. Yields of corn, cotton and soybeans are said to have risen by 20 percent to 30 percent through the use of genetic engineering.

Billions of edible animals are raised in this country each year on feed containing G.M.O.s, with no evidence of harm. In fact, animal health and growth efficiency actually improved on the genetically engineered feed, according to a 2014 review in the Journal of Animal Science.

Wider adoption of genetic engineering, especially in African and Asian countries that still spurn the technology, could greatly increase the food supply in areas where climate change will increasingly require that crops can grow in dry and salty soils and tolerate temperature extremes. I continue to be distressed by the resistance to Golden Rice, a crop genetically engineered to supply more vitamin A than spinach that could prevent irreversible blindness and more than a million deaths a year.

And people in developing countries faced with famine and malnutrition are likely to benefit from attempts to improve the protein content of food crops, as well as the amount of vitamins and minerals they provide.

This is not to say that everything done in the name of genetic engineering has a clean bill of health. Controversy abounds over the use of genetically modified seeds that produce crops like soy, corn, canola, alfalfa, cotton and sorghum that are resistant to a widely used herbicide, glyphosate, the health effects of which are still unclear.

In the latest development, resistance to a second weed killer, 2,4-D, has been combined with glyphosate resistance. Although the combination product, called Enlist Duo, was approved in 2014 by the Environmental Protection Agency, 2,4-D has been linked to an increase in non-Hodgkin’s lymphoma and a number of neurological disorders, researchers reported in the International Journal of Environmental Research and Public Health.

The bottom line: Consumers concerned about the growing use of G.M.O.s in the foods they depend on might consider taking a more nuanced approach than blanket opposition. Rather than wholesale rejection, take some time to learn about how genetic engineering works and the benefits it can offer now and in the future as climate change takes an ever greater toll on food supplies. Consider supporting efforts that result in safe products that represent improvements over the original and focusing opposition on those that are less desirable.